CHEER PACK® is an original package crammed with a great diversity of know-how.

“CHEER PACK®” is a registered trademark of Hosokawa Yoko Co., Ltd. for a spout-attached pouch.

It is a liquid container gentle to the environment and to people. 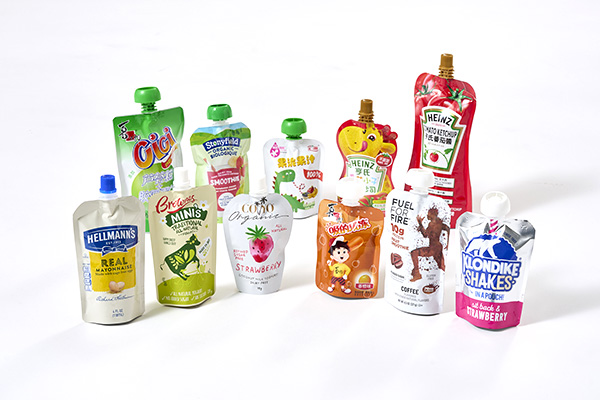 The liquid container CHEER PACK® supports a large variety of applications from heat sterilization treatment to deep-frozen storage. The pouch with a spout and cap attached to it is currently widely diffused as a liquid container and has become quite familiar. It was an epoch-making novelty, however, at the early stage of its development. Since it emerged as a commercial product it has gone through a process of continuously repeated modifications and improvements and CHEER PACK® has been cherished as a superior liquid container by users throughout the world. It sports such outstanding features as being capable of squeezing its content out to the last drop and as being effective in reducing residual content. It has also become a container endowed with the further function of being capable of re-closing which makes it possible to squeeze out only the amount of content required at any given time. It excels in having a gas barrier function, a humidity/moisture barrier function, and resistance to cold, heat, impact, bending, and to piercing and puncturing and is also suitable for long-term storage and utilization during natural disasters.

Taking advantage of these features it has come to be used in a wide range of applications such as jelly beverages, ice cream, viscous foods, and soft drinks. It is used not only for food but also for a great many products such as toiletries and industrial applications which has resulted in great acclaim in overseas countries as well.

CHEER PACK® is considerate also of the environment. Employment of a plastic film has led to development of a thin and light pouch. Compared with metal cans and glass and plastic bottles, the volume of CHEER PACK® pouch will be reduced to only 3%〜10% after use. This means a vast contribution to the reduction of waste. It also marks a step forwards in shifting to the mono-material (use of only one material) evolution driven by a commitment to making products thinner and more lightweight and by considerateness of the need for recycling.

We are pleased to offer our customers containers best for their needs.

Handling
The CHEER PACK® is convenient to carry thanks to its light weight and also to handle with its content-suited performance and configuration of films having appropriate level of rigidity. We are committed to offer containers superior in ease of use to our customers.

Squeezing function
The CHEER PACK® pouch has a superior squeezing function. Apart from food products such as ice cream and miso paste, it is suited also for applications that require squeezing out of contents having a pasty or viscous texture. It is easy to squeeze out the content to the last drop and thus capable of reducing residual content. After the content has been squeezed out there will be no return of air into the pouch which makes it effective in preventing oxidative deterioration of content.

Re-closing function
Re-closing is made possible by the use of a cap. It is quite useful for re-closing for a moment while drinking and for contents that will not be used up at a time.

Suitable for retort products
A type of CHEER PACK® pouch which is suitable for retort products is also available. This CHEER PACK® function is suitably available for contents considered as necessitating the application of retort treatment such as neutral (pH) foods, nutrient foods, and soups. CHEER PACK® pouches incorporate a variety of know-how to meet the requirement for resistance to the retort process while maintaining the sealing and resealing functions required for a spout-attached pouch.

Volumes suited for a wide range of applications can be accommodated in the broad range from 70ml to 1500ml. Pouch types of various shapes such as side gusset pouches, standing pouches, and flat pouches are also available.

A wide varieties of spouts and caps

Spouts and caps with various specifications are available, including those can be opened and closed with minimum force, even by children and elderly users easily.

A variety of spouts and caps is available to meet diverse applications.

It is possible to supply both parts and products separately or pouches with a spout installed at the time of shipment. Caps suitable for specific spouts have been selected.

Types of spout and cap

Barrier spout
Barrier spout uses a barrier material inside the spout to prevent oxygen and water vapor from entering the pouch and prevent deterioration and discoloration of the contents. Barrier spouts are effective not only in preventing oxidation of the contents, but also protecting the hydrogen concentration of hydrogen water. It is available for hot filling and retort filling.
Examples of use: baby food, retort products, liquors, liquid seasoning, hydrogen water, etc.

Straw type (8.55mm inner diameter)
The straw type is generally used most widely. As the straw function is inside the pouch this type is suited for contents which need to be sucked to be imbibed such as jelly beverages and soft drinks.
Caps for the straw type are in common with those of the spout type.

Spout type (8.55mm inner diameter)
Pouches having a structure that consists only of a spout are suited for squeezing.
Caps for the straw type are in common with those of the spout type.

Large Cap
Caps having a larger outer diameter are employed to make opening easier. This is effective also in preventing accidental swallowing by infants. The inner diameter of this type of spout is 8.55mm.

Large diameter type (11mm inner diameter)
This type has a diameter larger than that of the general type and is suitable for contents containing solids and for contents of high viscosity.

Dodge system type
This type has a tamper-proof device that will remain on the side of the spout when removed from the cap and is thus suitable for food-content in pouches which are opened and closed frequently.

Retort type
This type is capable of being subjected to retort treatment. Also the pouch is made fit for retort specifications.

The film used in CHEER PACK® may look simple at a glance but in reality it has a composite structure consisting of a plastic film and of an aluminum foil. We are able to offer a film with an optimum design in terms of composition and thickness to meet the various physical properties required such as content, and the pouch’s volume and weight.

As part of our commitment to the environment we have developed a film which is thinner than the conventional film layer while at the same time retaining the pouch’s strength. Progress in contributing to the environment has been achieved through a reduction of the amount of plastic used.

CHEEER PACK® necessitates the use of special filling and manufacturing equipment, We are able to offer fully integrated manufacturing lines which include in addition to filling machines ranging from simple to automatic ones, and which also include compounding lines, post-filling sterilizing lines, and packaging lines.

Highly nutritional foods, liquid foods, intestinally administered and nutrient preparations, disposability and storability, and joint with connector is possible at the touch of a button

The DuPont Prize was conferred as a distinction for development of the advanced plastic-using package product and for application improvement and manufacturing technology development by DuPont, a major chemicals manufacturer in the U.S. The prize has a more than 30 year long history going back to 1986 and is known as most authoritative prize worldwide.（※Following the merger of DuPont with Dow the prize now continues as the “Dow Packaging Innovation Awards.”） The prize is presently being conferred to innovative products which exert an impact on the packing industry and which combine the features of originality, range of applications, and price and industrial productivity, and beauty. For its award international competitions are held for adjudication based on a special examination procedure. CHEER PACK®, honored as it had been to be the first in Japanese industry to be awarded the DuPont Prize, received the Diamond Prize in 1995. Hosokawa Yoko has continued striding as the frontier of liquid containers and is doing also now, while carrying through successive improvements.

This website uses cookies to improve your experience. We'll assume you're ok with this, but you can opt-out if you wish. [more info]